Under the patronage of H.H. Sheikh Mohammed bin Rashid Al Maktoum, Vice-President and Prime Minister of United Arab Emirates and Ruler of Dubai

Message From The Chairman 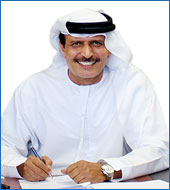 It is with great pleasure that I, on behalf of the Conference’s Organizing Committee, invite you to participate at the 10th Offshore Arabia Conference & Exhibition. This prestigious international conference & exhibition is to be held under the patronage of His Highness Sheikh Mohammed bin Rashid Al Maktoum, Vice-President, Prime Minister of United Arab Emirates, Ruler of Dubai.

In keeping with the theme, “Managing Marine & Offshore Transformation – Challenges, Solutions & Opportunities” we have invited experts in the relevant fields to be our speakers for the Visionary Sessions and Keynote Addresses.

The exhibition which is to be held simultaneously will provide the opportunity to showcase the “state of the art know-how and technology and will also reflect every organization’s commitment to marine, maritime and environment”. Offshore Arabia 2019 presents an excellent platform for networking, the exchange of knowledge and information between individuals, business opportunities and strategic partnerships between exhibitors and conference participants.

In this challenging business environment, new companies are emerging and new markets are being developed presenting plenty of new opportunities. But where are those opportunities, how can we identify them, and how can we avoid falling into the same traps that have caused so much instability and uncertainty over the past few years? Offshore Arabia 2019 is the only platform where east meets west, we are aware of the increasing business challenges and strategic decisions thus we offer improved initiatives here that can be realized.

This conference will provide some of the answers. A team of high-level speakers, from a wide range of sectors will highlight these issues. These involve the oil and gas sector to Oil, Chemical and other Harmful Substances, Spill prevention, Response, Protection, Contamination of Marine and Coastal Environment/ Crises and Disaster Management and from the Marine and Shipping Industry to Global Trade, from Global and Regional Environmental Issues and Climate Change to New Technologies and Renewable Energy and finally the role of legal & finance in the marine & maritime sector an event you will only love to be at.

We stand for global partnership and by working together we will demonstrate that there is a way out of the chaos. I invite you to participate and we are looking forward to your active participation in Offshore Arabia 2019.

Once again, I welcome you to your Offshore Arabia Conference & Exhibition.

H.E. Khamis Juma Buamim is the Board Member and Managing Director and Group CEO of Gulf Navigation Holding PJSC, he was appointed in April 2016.
Mr. Buamim is the Chairman of the Dubai Council for Marine and Maritime Industries (Dcmmiemirates), the specialized industry council (non-profit trade and industry) and it was formed to promote the interests of the offshore and maritime industry in Dubai and the UAE. He is also the Chairman of the Federal Committee for the Revision and Update of the UAE Maritime Law, the committee was created to review and update the UAE Commercial Maritime Law and formulate a new & futuristic law that will propel and govern the ongoing potential growth of business and the maritime industry in the UAE and the region.
Mr. Buamim is the former Chairman and Chief Executive officer of Drydocks world and Maritime world and Chairman of the Board of DDW-PaxOcean Asia pte, Singapore and has successfully led the organization through its restructuring during the global financial crisis. His leadership and direction have been instrumental in the company being able to acquire several pioneering projects on a global scale. This leadership has seen the company move from close to financial failure, create major synergies, recognize potential and place the organization firmly on a path driven to sustainable profitability and growth.
Mr. Buamim is a Leading veteran in the oil and gas industry worked with Conoco and ConocoPhillips for 26 years and held various corporate and management positions, including vice president of Dubai oil company (DPC), a subsidiary of ConocoPhillips in the United Arab Emirates. He was also the President and Chief Executive Officer of Regional Clean Sea Organization (RECSO) the oil industry environmental arm in the Gulf region.
Mr. Buamim is also involved in a number of leading private & public organization, he is member of the Dubai Government Crises and Disasters Management Team, member of the Advisory board of Emirates Classification Society (Tasneef) , Vice Chairman of the Federal Transportation Authority Technical Committee, Advisor to the Career Gulf Development and Senior Advisor in the Middle East and North Africa- Business strategies & International Energy.
Mr. Buamim has won many Awards and life time achievements, including being recognized as the most influential maritime top 50 personalities in the world by Tanker Shipping & Trade magazine of London 2015, HH. sheikh Mohammed Bin Rashid Business Award 2014, The Tatweej Personality Award for leadership, management and business 2014, The “Outstanding Lifetime Achievement” award from Lloyd’s List London for Business 2014, The year personality award in the field of marine and maritime industry by International Ships Techniques 2013, Sword of Honors from the British Safety Council, London 2014, The International Prize in Human Resource Management, The Archimedes Achievement Award “for excellence and exchange of knowledge” – United States of America and so many other.
Holds Bachelor of Business Administration and Economics – United Kingdom and the National Administration degree in Crises Management and incident Command – United States of America and the High-accreditation on international human resources management (IPM).